Merry Christmas from the crew of Madrona 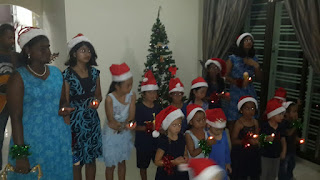 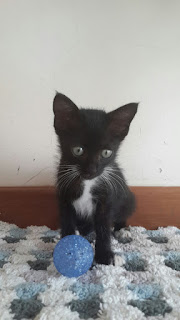 Dec. 20th we spent the day making Christmas cookies and stencilled snowflakes for this group of carolers who came to our house and performed in our living room. It was spectacular. Our home was filled with the spirit and songs of Christmas.

Dec. 22nd we adopted a rescued kitty found around Nusajaya just in time for Christmas- she was on Griffyn's list and has become best buddies with Gembus (our 1st adopted kitty from the Island of Tioman, Malaysia) 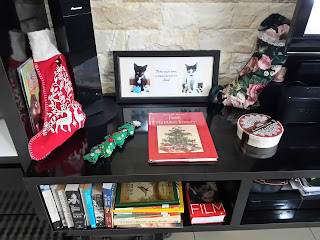 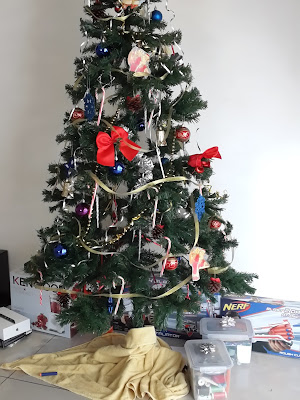 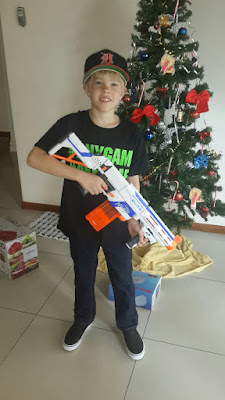 Dec. 25th
Our tree.
It is much larger than the one we had on the boat which Griffyn has in his room with presents for Graffy.

Griffyn wearing all his new clothes from Aunt Wendy & Uncle Joe holding the dart gun Santa left for him. 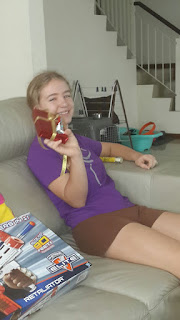 Tamsyn holding up her new hard drive. She is working on a novella (18,000 words). You'll have to ask her more about that story.

Merry Christmas from the family near Madrona. She’s in Puteri Harbor waiting for us.

We are living in suburbia in a rented house that is bigger than the home we owned in Lynnwood, Washington. We have better jobs than we could find back in Seattle. We have a full time maid and cook. We are paying off debt and saving. We have jobs and can see future work in our field. Our kids go to a good school. I have an art studio and have been painting and learning to carve.

Not long after we started teaching at an international school, we met another American couple. She was a teacher at the other big successful international school here, Marlborough College (a sister school to the one in England). We mentioned that we had sailed to Malaysia on our 37 foot yacht, that it took us three and a half years to get here. We talked some more while we ate dinner at the local pizza joint here in Horizon Hills. At some point in the conversation while we were talking about living in close quarters on a little boat for many days at sea and years in foreign ports, she said, “that’s a lot of quality time.” She was being sarcastic - she couldn’t imagine spending that much time with her loved ones or in that small of a space for such long periods without hope of getting away from one another.

She was right - it was hard living in tiny spaces for long periods of time especially when something broke down and we were stuck in some rocky anchorage getting sea sick at anchor while Owen brainstormed ways of fixing yet another engine problem. It was hard being sea sick for 3 days every time we left port. It was hard needing a dinghy to get to shore when our outboard motor stopped working the third time. It was hard feeling trapped when we couldn’t go into the cockpit for fear of a wave flooding the cabin as we opened the hatch.

There were a lot of hard moments - especially that final passage from Bali to Danga Bay, Malaysia. When we stepped onto the dock at Danga - we wanted to run on land for a long time, to rest from sailing, to make some money, to stop struggling.

Every time I go back to Madrona, to get something, to clean the deck, to check something inside - I touch something that brings forth a powerful memory and I feel a sense of freedom that only a blue water boat can give me. She is waiting for us.

This year I am looking forward to putting money into Madrona, getting new sails and canvas. I’m looking forward to dusting off those old memories and making space for new ones.  (This picture of Madrona at Puteri Harbor - was taken by Behan, SVTotem). 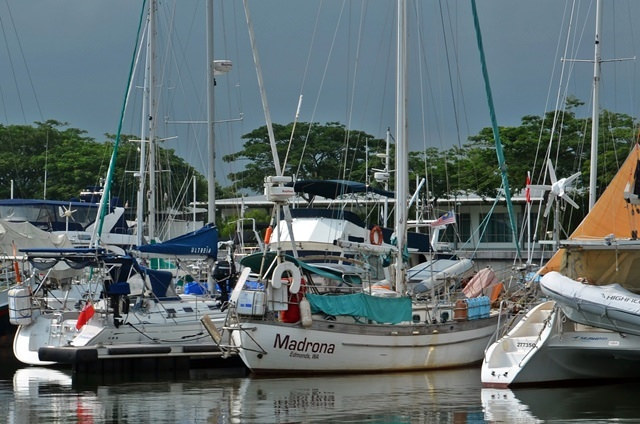